What's funny about this picture? 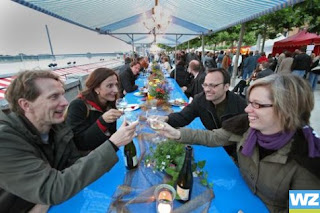 Kulinarische Leckerbissen samt Rheinblick und Ballon-Spektakel erwarteten die Besucher der Mittsommernacht am Wochenende.
This photo was on the front page of our local paper yesterday. The caption basically reads: Guests enjoy cultural treats while awaiting the Midsummer night on the weekend. I asked the 14 year old and a friend who he had over, what was funny about the photo. They each examined it carefully, but could find nothing. I gave them the answer: "It's a midsummer party and they're wearing jackets and scarves!" Oh, I hate you, German summer.
Posted by Rachel at 12:55 AM 3 comments:

I Got A New Apron

The parents went to Rome for three days. I filled in as "mom" while they were gone. When they came back, they had an apron for me. There was da Vinci's Vitruvian Man on it along with a number of other sketches and some fancy cursive letters scribbling "Rome" all over it. It was tacky. Then the mom showed me hers. It was Botticelli's La Venere. Her head was absent and her exposed breasts rested over the wearer's. The mom said, "I assumed I shouldn't give you this one because, you know, you're American...", and then she made the sort of face that one symbolizes by using this emoticon: :-/ . In my mind, she said, "Even though we've been living in the same house for nearly twelve months, I still think you must be a conservative American." The mom continued, "... but if you'd like to trade...." I interrupted her, "Yes! I'd love to trade!!" So now I have a boobalicious apron.
Posted by Rachel at 12:33 AM 4 comments: 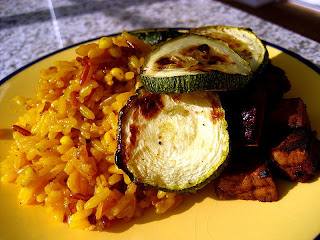 From Veganomicon. Sooooo yummy. I think broiled tofu is my new thang. I had this as a picinic dinner with a friend from Aachen who came to visit me here in Neuss. Thankfully, Neuss did not smell like the paper ass that it can sometimes assualt the olfactory sytem with on a perfectly lovely afternoon. We sat in a chilly park by a pond, ate, drank beer and chatted 'til the sun went down. I took him to the train station at 10:30 in the evening.
Posted by Rachel at 9:30 AM 1 comment: 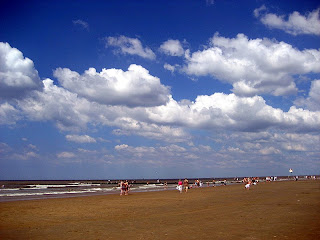 Erin and I went to Den Haag in the Netherlands this weekend to visit our friend Frank. We was staying in this cool apartment (pictured right). Frank invited one of his Amsterdam friends along, Valentijn, who was named after Valentine's Day. Valentijn drove us to the beach on Sunday. On the way, Erin and I camped out in the back of his van and practiced our cat-like reflexes in avoiding being sighted by the police (politie) because his van was not the sort that was supposed to hold more than two passengers.

The sun was warm, the breeze was cool, and and 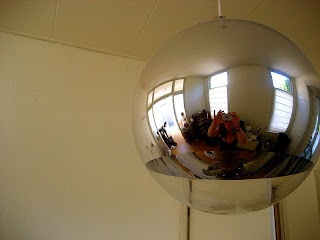 the water was freezing. Erin, Valentijn and I swam while Frank laid his docile self out on the sand and "watched" after out things. The waves crashed against our bodies with an unexpected force that one should learn to expect. Erin shouted to me from a distance, "I can't stop screaming!" Suddenly, a wave hit me from behind and, surprised by its sting, I screamed. We stayed in the water 'til we were good and numb.

Oh yeah, the city was alright as well, although we didn't spend too much time out and about. We mostly hung out on the terrace and talked all night.
Posted by Rachel at 3:17 AM 1 comment:

There Ain't Nothin' Wrong with Sweet Hot Sauce from a Bottle 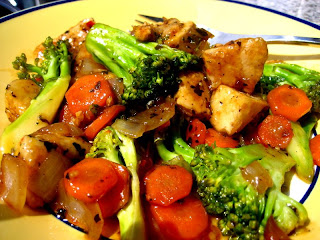 See? Alongside some broccoli, carrots, and crispy tofu, nothing can go wrong.
Posted by Rachel at 3:06 AM 2 comments:

A friend recently gave me her copy of Veganomicon. It feels strange to talk about the book as if it were mine. She's moving to England soon and she has to get rid of a lot of her things-- she doesn't want to spend a fortune on shipping things. I understand that she'd be ditching some of these things anyway, but still, it's hard to accept such nice things. Well, I'm taking her out to a nice all-vegetarian, organic restaurant in Düsseldorf soon. I hope that'll make up for a little bit of it. 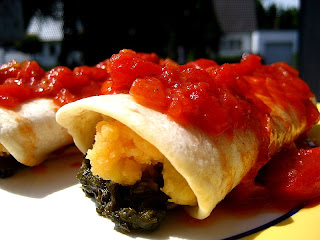 I've been wondering, "What will I make first? The Chickpea Cutlets? Vanilla Yogurt Pound Cake?"

In the photo section, I saw a heart-warming picture of Potato Kale Enchiladas and my heart was won.

I subsitituted kale for spinach and some way-too-expensive and "exotic" soft flour tacos for the corn tortillas that the recipe asks for. When I made them yesterday, I was a pretty underwhelmed. Today, I mixed the potatoes and spinach together, served everything at the right temperature, and got the wrap to the right level of sogginess-- then it reached my standards.
Posted by Rachel at 2:35 AM 3 comments:

I dreamed that I was staying as a semi-permanent guest in my friend Frank's old flat. Everything was filthy as if we'd partied like frat boys the night before. Another friend of mine, Erin, and I were staying in one of the three bedrooms which would normally occupy one of the flat's three residents.

We woke up together to find this chaos. We were woken by a strange man who was short with brown, army-cut hair and too-tan skin who strolled into the room. It might've been his room, but I felt as if it were mine and I was embarassed on account of the mess. He walked back out again and Erin and I began to get ready.

I went to the bathroom for my morning pee. The bathroom was falling apart. The door didn't shut properly. One of Frank's friends came in the doorway in a manner that was both accidental and casual. I don't know which of Frank's friends it was-- they all look the same to mee: skinny, long hair, slanty-eyed, artsy, plaid shirts. He was in the doorway for a short time and then he left. I couldn't pee.

I heard someone else coming and I leaned forward on the seat and moved to shut the door. But the door, in its dilapidated state, fell off its hinges as I tried to swing it shut. Stirred by the commotion or perhaps with the original intent of peaking in, Freddie, one of the flat's residents, appeared in the doorway. In real life, I have a gigantic pathetic crush on this kid whom Frank and I have given the epithet of Cherub Cheeks. My emotions in my dream were not much different. Freddie started to speak to me, but I couldn't listen. I was on the toilet with naught but a T-shirt on and underpants down to my ankles. I couldn't pee, so I got up off the toilet.

Freddie and I were in the hallway. He was still speaking to me. I still couldn't listen-- I was thinking about my underwear. I was sure that I was wearing a thong and was horridly aware of my bare butt standing blatantly in the hallway. Then I remembered that I was wearing a sort of underwear that partially covered my tush and I relaxed a little. I tried to speak to him a little, but I couldnt remember many words in German. (Freddie doesn't speak English.)

Then Erin and I were still getting ready. She had a friend coming over that she knew from her German course. Erin was getting dressed and preparing a mixed tape for the guest on a machine that could've also been a toddler's playtoy. She sent me into the hallway to meet the guest because she was still not ready and she wanted the tape to be a surprise.

Erin's friend was a Pakistani or Indian woman and spoke in heavily accented German. We made small talk for a while until Erin called her in, speaking English. I wondered why the two of us hadn't started with English. Then I couldn't decide the language with which I should speak, flipping back and forth between the two. Then I woke up.
Posted by Rachel at 12:49 AM No comments: